The list also includes the number of light novel volumes, manga chapters, anime episodes and specials the story arc has.

Solum Arc is the first major story arc introduced in the Kou 1 Desu Ga Isekai De Joushu Hajimemashita series. When a magic map suddenly teleports them to an unknown place, Hiroto and Soichiro are landed on Solum where he had to do Ulkan's bidding in capturing a vampire named Valkyrie. At the same time, whilst they also encounter other species that also lived at Solum, such as Mummies and Skeletons, the boys also learn that they are Diferente, a. This introductory arc marks the rise of Hiroto as the lord.

Sorceire Arc is the second story arc of Salabria Saga. This arc set on Hiroto and his allies' journey to Secondaria after his promotion as the Lord of Solum. Along the way, they also have to confront several noblemen who belittled Solum, specifically Torlan the Steward of Secondaria due to Secondaria Alliance's antagonism against the Ibrid System. This arc also introduces Sorceire, daughter of Damur the Lord of Neka who is cursed as a Skeleton GIrl because her carriage has knocked a skeleton flower girl but fleeing away instead of apologize.

Torlan Arc is the third story arc of Salabria Saga. Set in 2 months after the bandits raid incident at Secondaria, Hiroto's fame quickly rises as he gained many allies, with Darmur as one of them for he declaring Neka's cancellation of the Development Plan in order to repay Hiroto's heroic deeds in finding ans saving Sorceire. Torlan, who is strongly despises Hiroto and now Darmur out of his "betrayal"will terminate the Secondaria Development Plan. In order to preserve the project and avenge his humiliation from the last incident, Torlan vows to do anything to sully the Diferente even if this means collaborating with his lord Feuillet.

Election Arc is the forth story arc and the last story arc of Salabria Saga. This arc introducing Salabria Corectio-an election that is helt at Salabria in order to choose one eligible candidate as the next Governor of Salabria. While the arc will conclude the heated rivalry between Hiroto and Feuillet, with the latter trying to sabotage the former in any chance to gain further fame, it also introducing Excelis-an elven Castle Lord of Primaria who happens to be one three main participant for the Corectio, making her as one of Hiroto's rival during the election. 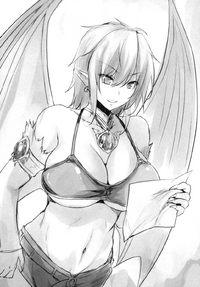 Gezerkia Arc is the first story arc of Hybride and Phyllis Saga. Sometime after Salabria Corectio, Olsia is under attacked by Gezerkia and her Vampire Army who have captured some of its castles and planning on invading Salabria. To combat the seemly unstoppable vampires, Hiroto is tasked

Hybride Ministers Arc is the second story arc of Hybride and Phyllis Saga. Despite Hiroto's contribution of saving Olsia from Gezerkia and her vampire army, Panopticus-the kingdom's Prime Minister who attempted to abolish the Ibrid System-attempt to crush the Diferente by collaborating with some of Salabria's noblemen who still despise the youngest governor. At the same time, Hybride is under attack by Phyllis Army and it ironically requires Hiroto's help to quell the invading enemies.

Phyllis Affairs Arc is the third and last story arc of Hybride and Phyllis Saga. This arc continues the feud between Hybride and Phyllis as Hiroto continues to deal with the enemy kingdom from the south. From his friendship with Raquel the exiled noblewoman to his confrontation with Phyllis generals such as Metis, as well as his feud with Joachim and Felkina during the duo's attempt to revive the defunct North Phyllis Kingdom, Hiroto has become one of Hybride's pivotal figure in its' diplomatic relationship with Phyllis regardless of the outcome.

Bourgault Arc is the first story arc of Magia Saga. Set in one-year time skip, Hiroto is feuding with an aristocrat named Count Bourgault who hinders his investigation at Noblesia so he can to protect his son Pollard, of whom was a suspect as Cecela's (Mimia's sister) rapist. Despite his efforts, however, Pollard is executed and not only it consequently fueling the lord's hatred for Hiroto, it also prompts Emperia's aristocrats (particularly Finnath, Belffergo, Ramsus) to smear the Diferente by seeking Orfina (Moldius's favorite concubine and distant cousin to both Finnath and Belffergo) for their twisted cause.

Magia Invasion Arc is the second story arc of Magia Saga. Sometime after Hiroto survives Emperia's conspiracy, Hybride is threaten by an impending invasion from Magia Army under a degree of it's new king Urseus, who has a strong animosity against Hiroto and the vampires. To counter this threat, Hiroto and his allies have to seek as much allies as they could to halt, or at least prevent, Magia Army's invasion onto Hybride.

Four Kingdoms Summit Arc is the third and last story arc of Magia Saga. This arc continues and concludes the intense rivalry between Hybride and Magia as Urseus attmept to crush Hybride by defeating Hiroto with any schemes he can think of, even if it means conspiring with Regulus's Cognidus and Dialogs to ocharstrate Four Kingdoms Summit. Aside from the schemes from Magia and Regulus, Hiroto also have to confront his 2 new rivals such as Disgurd the Blue Winged Vampire and Freyas the Princess of Phyllis.

Western Kingdoms Arc is first story arc of New Era Saga. Set in sometime after the Four Kingdoms Summit, western kingdoms such as Agnika and Gassel are feuding with each other over one fire incident at the latter's port.

Succession Dispute Arc is second story arc of New Era Saga. In spite of contribution in quelling the Agnika-Gassel rivalry, Hiroto and Leonidas are blamed for the latter prince's amoral attitude courtesy of Serfelis-an elven minister who replaces Sobrinus as a new member of Emperia's Privy Council. To make matters worse, Moldius suddenly fell ill when Hydran becomes a popular candidate for the crown, which giving Leonidas a severe disadvantage.

Retrieved from "https://kou1isekai.fandom.com/wiki/Story_Arc_and_Saga?oldid=4391"
Community content is available under CC-BY-SA unless otherwise noted.